We all feel angry at times – it’s part of being human. Anger is a normal, healthy emotion, which we might experience if we feel:

Anger isn’t necessarily a ‘bad’ emotion; in fact it can sometimes be useful. For example, feeling angry about something can:

Anger is your external way to express something that is going on for you internally (a reflection of how you feel on the inside).

Tips for Dealing with Anger: 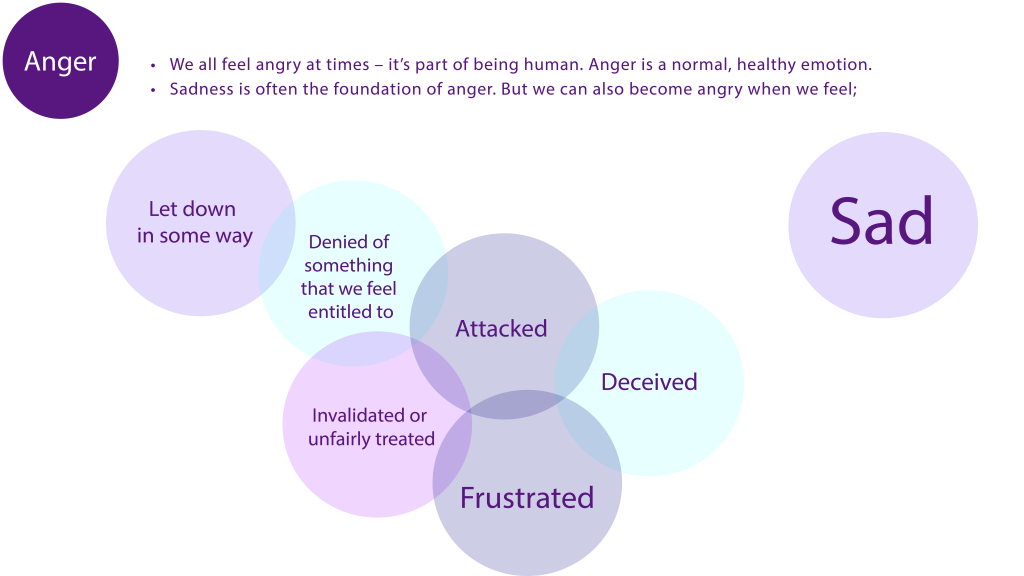 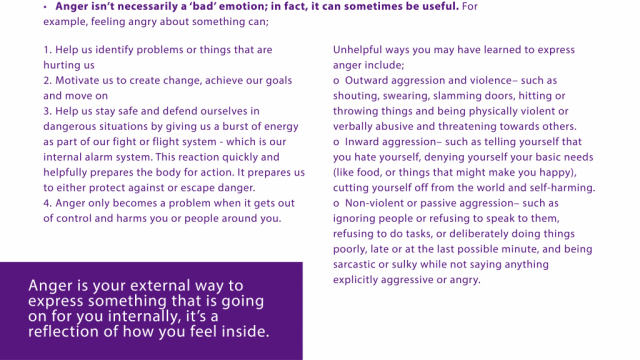 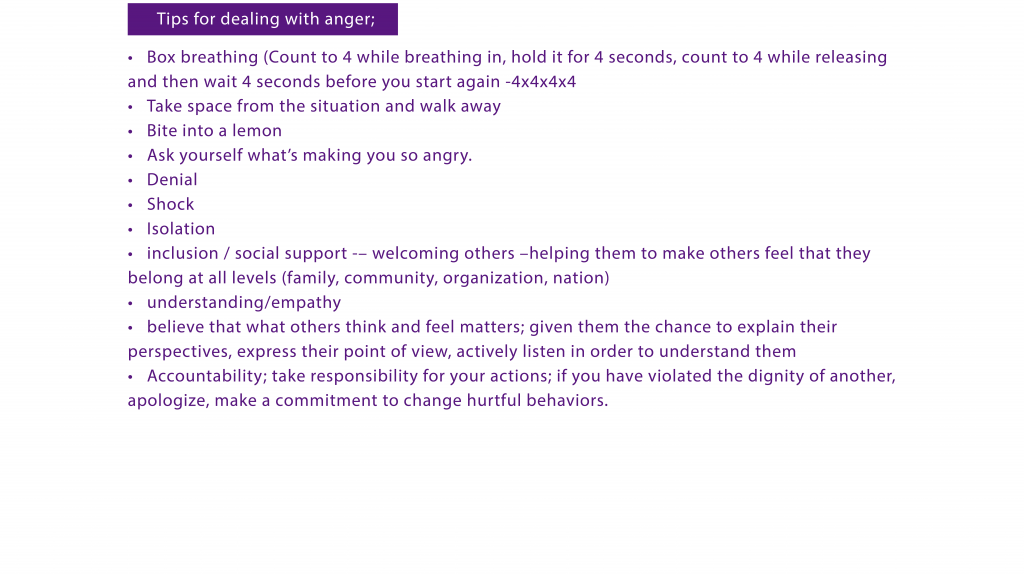 The campaign aims to challenge the idea that violence is a solution to home conflict. In order to deescalate domestic tension and create a harmonious home the campaign presents talking and listening as an alternative resolution path, rather than lashing out in anger.

Developing and implementing trauma rehabilitation to professors and admin staff at the university. The professors then will work with their students to psychologically support them after the critical incident.

Organized and coordinated with WHO and the Mental Health & Psychosocial Support Network (MHPSS) working group in Afghanistan, to prepare strategic plans, TORs, and mapping for the sustainability of the working groups. Put together protocols, manuals, minimum standards for MHPSS, as well as psychological guides for their teams in Afghanistan and served as key liaison for MHPSS throughout Afghanistan. Guided and fostered relationships with all relevant MHPSS stakeholders and providers within Afghanistan and abroad, working closely with the Ministry of Public Health (MoPH).

Providing technical advice and supervision to IRC’s Protection Team based in Afghanistan. Producing a comprehensive report to inform Protection staff with limited knowledge on mental health on the situation in Afghanistan, the core principles of MHPSS and to outline potential strategy for integrating MHPSS into Protection response. Adapting and delivering training on MHPSS to Protection staff, and facilitating skill-building in case management.

Designing and creating mental health and psychological tools and resources for caregivers and children affected by the crisis in Ukraine. Our team directed and produced short films focused on showing culturally appropriate and relevant skills building for those experiencing displacement and trauma, and then disseminated these to the target population.

Project:
External Evaluation of the project Mitigating the potential impact of the COVID-19 Crisis on the Peace Process in Afghanistan
Client:
Geneva Call
Client Info:
https://www.genevacall.org/

Conducted a final external evaluation of the implementation of Geneva Call’s Afghanistan project. Our team developed key research questions, conducted fieldwork in Kabul, and produced a final evaluation analyzing to what extent the organization had mitigated potential impacts of the Covid-19 pandemic on the healthcare of vulnerable populations.

In response to the fall of Kabul, POMA was awarded a $10,000 grant by Choose Love. Our team coordinated with Click.af to purchase, package and distribute aid packages of food and sanitary products to vulnerable families in Kabul. Additionally, we collected and paid electricity bills for families.

During and post- the fall of Kabul, our team coordinated an emergency response to ensure the protection of hundreds of vulnerable children in and around the city. Our response included evacuating vulnerable children, families and women. We coordinated with international development agencies and governments to reunite detained children with their families in preparation for evacuation, and prevented the trafficking of young girls and young boys susceptible to radicalization through mediation. We developed a crisis contingency plan, defining immediate and future needs for child protection agencies.

A joint project with Asylex, with our teams collaborating as psychology expert and legal expert, to elaborate on the guidelines and quality standards of legal assistance of children in conflict with the law in Europe. This report will contribute to the ‘CLEAR Rights: enhancing legal assistance for children in Europe’ project, strengthening access to quality and specialized legal aid for minors in Europe.

Training approx. 25 Seefar counsellors in Kabul on providing mental health related guidance to people who have experienced trauma. The organization works with migrants who have migrated primarily with economic motivations, not due to conflict. Our team was only able to complete the first phase of the project due to the change of regimes in Kabul.

Through this pilot study, we will conduct a randomized experiment in Kabul, Afghanistan, to assess the impacts of basic cognitive behavioral therapy (CBT) sessions that incorporate Islamic beliefs and are delivered by trained religious clerics. The randomized experiment will examine the role of Islamic-based counseling in helping civilians cope with the adverse psychological effects of war and fostering support for peace and reconciliation.

Developing and coordinating a training program for staff working in the Kabul office, raising awareness of workplace harassment, the psychological effects, and providing management with tools for the establishment of a complaints system.

Drafting and developing policy for all forms of workplace harassment in the organization’s Kabul office. Providing psychological and rehabilitation support to national staff.

Developing and implementing a strategic vision for over 400 employees and their areas of responsibility, performing career counselling and acting as a platform for employee concerns. Providing clinical psychological support to employees, psych education to managerial staff, and promoting the overall health and well-being of all employees.

In depth research regarding the psychological well being of returnees’ to Afghanistan. Sensitivity and trauma-informed training provided to field-based researchers.

Developing and implementing mental health dialogues for the Youth throughout Afghanistan (LLCs).

Providing psychological debriefings to ATR staff in order to support their well-being.

Development and review of HR policies to empower Kabul-based staff and provide a platform for employees to address concerns.

Partnering with IOM and MoI Afghanistan to develop strategies and policies to address and reform child trafficking in Afghanistan.

Peacebuilding in Prisons: Fostering the Reintegration and Rehabilitation of Adult Political Prison Populations in Afghanistan.

Provision of technical advise to a national consultant responsible for conducting a case management capacity assessment across three districts. Development and support for the implementation of a capacity building plan for CPAN and CP actors in Ghor, Afghanistan.

The feasibility study “Strengthening Women, Promoting Peace,  Networking Across Countries, Enabling Education: Better Integration of Refugees and Internally  Displaced Persons in Host Communities in Pakistan and Afghanistan”, a project funded by TDH Germany (10%) and the BMZ (90%), assesses in borderland geographies of Afghanistan to what extent it is possible to implement measures for improved livelihood and integrated living situations for refugees/returnees and IDPs as well as host communities over the course of five years in the provinces of Nangarhar and Paktika.

PoMA entered the project as contracted end. As such our insights, in contrast to the mid-term narrative report provided, offer an overview of implemented projects as well as the implications of the end phase of the project on the beneficiaries as well as implementing partners on the ground in Kabul and Mazar-e Sharif. To provide a deeper understanding on the implementation of project activities in the province of Balkh and Kabul, this section of the report provides an overview of general project activities and discusses challenges and limitations in the evaluation of the implementation of set targets documented.

An examination in age-based differences in “knowledge” regarding the role of counsel, presumptions about counsel, and maturity of judgment when making decisions about whether to waive the right to counsel, funded by the National Institute of Health. Along with emerging issues for Juveniles Forensics evaluation, practices and policies.

An investigation pertaining to developing statutes for competence to stand trial and criminal responsibility in juvenile delinquency proceedings.

Monitoring and evaluation in a trauma sensitive manner, useful qualitative and quantitative data from survivors of gender-based violence and/or trafficking in persons

Providing clinical support to staff members working at the Swedish Embassy in Afghanistan.

The Juvenile Rehabilitation Center (JRC) project is designed to lessen chances of radicalization among the youth kept in Juvenile Rehabilitation Centers (JRCs) in Kabul. The JRC project aims to provide hands-on psychological rehabilitation and interventions and facilitate other recreational and vocational activities to both female and male youth at the JRCs with the aim of addressing psychological/mental health issues and underlying vulnerabilities which can lead to becoming part of a hostile group – including those espousing radical religious views.Leading a project for the Ministry of Justice aimed at rehabilitating and reintegrating juveniles detained in JRCs in Afghan prisons.

Mental Health Awareness Campaign in Afghanistan Leading a mental health awareness campaign on behalf of the Ministry of Public Health across Afghanistan and spanning a year with multiple messaging channels.

Development of working group MHPSS Afghanistan: Preparation of SOP, Qualifications for PSS Workers, strategize for providers and stakeholders in Afghanistan

Review of all children centers throughout Afghanistan.

March 2020 in response to the crash of a U.S. Air force E-11A Battlefield Airborne Communications Node (BACN) aircraft in Kandahar on January 27 2020. Individual and group psychological counselling was provided to deal with grief and trauma which revealed some insight into some ongoing challenges and recommendations for personnel going forward.

The project aimed at the rehabilitation and reintegration of minors (children under the age of 18) who were detained at the start of November 2019 by the Afghan authorities after being captured in operations against the Islamic State in Khorasan Province (ISKP)/Daesh. The children are family members of Daesh fighters and were detained after the surrender of fighters from that group.

The core activities proposed will be to develop and conduct a needs assessment, develop PSS toolkits and training packages, and to train emergency teams on basic Psychological First Aid (PFA) principles so that they can incorporate these into their work.